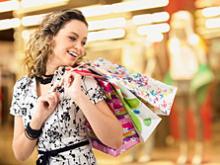 Omani markets are characterised by their diversity. Old markets are full of handicrafts such as silver, gold, textiles and masterpieces produced by traditional industries like dagger-making, side by side with modern shopping centres that contain everything the visitor is looking for at the best prices.

For the traditional markets in Oman, the morning hours are the best time for shopping. 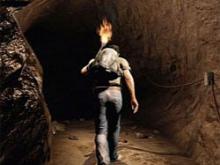 Oman offers some of the most hair-raising cave exploration in the world and should only be attempted by experienced and fit cavers, preferably accompanied by someone who has traversed the caves before.

One of the most famous caves is the 'Majlis Al-Jinn'; the second largest underground chamber in the world. This is an extremely difficult cave to negotiate, and it is important that the expedition is not undertaken lightly and without professional guidance.

A popular cave for the less intrepid is Hoti Cave which comprises an underground cavern and subterranean lake system.

Many caves in Oman are, essentially, underground wadis. So, one should not attempt any caving with chances of near rain, or if it has recently rained in the area. 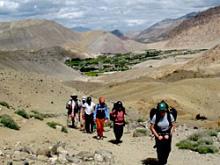 The trekking season is generally from September to May, but the best period is October to April. Above 1,900 meter altitude trekking is possible all year round. The countryside is mostly rugged and the trails are loose, but trekking is by far the best way to enjoy Oman's spectacular mountain-landscape.

Different types of trips with varying degrees of difficulty can be done; from the easy start in Capital Area to the stunning Rim Walk in the Grand Canyon of Jabal Shams.

If you are inexperienced in hiking/trekking please contact someone with experience before you set off: In Muscat and Interior, there are a few local tour operators which can provide a fully organised trek, complete with Donkey-porters, guide, necessary equipment and transport to and from the starting and finishing points. They also provide participants with a choice of itineraries.

Now for the first time in Oman, trekking routes have been marked and signposted which can be easily recognised by the brown coloured signboards pointing to the beginning of the marked treks. Further details can be found in the Trekking guide book "Adventure Trekking in Oman" or by contacting certain tour operators in Muscat or the interior. The trekking map will be issued shortly and announced on this website. 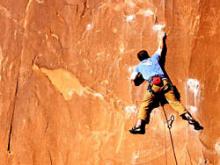 There are many craggy mountains and steep sea cliffs in Oman to tempt the rock-climber. The Sultanate provides everything to interested climber: from sports climbing and cragging to multi pitch routes –bolted or traditional– where the rocks are high as 250 m.

Jabal Ghul with its 300 m towers offers Alpine style climbing at it's best as well as the gorgeous Southeastern face of Jebal Mishfa with climbs from 120 to 500 m.

The best known site is Jebal Misht and has probably got the biggest rock face of whole of the Arabian Peninsula. It's South and Southeast face stretch for about 6 Km and is up to 850 m high. Alpine style routes of all grades are available. The biggest problem will not be hypothermia but heat exhaustion; the rock face can be extremely hot and sharp. The choice of a route will depend on the time of year and direction it faces. 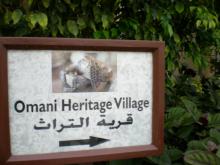 Nestled in the premises of Shangri-La’s Barr Al Jissah Resort and Spa, this heritage village is a popular tourist attraction. The village is a reincarnation of a bygone era that establishes the same mystical and authentic atmosphere of a souk.

Here, at the Omani Heritage Village you will get a firsthand experience of some the Sultanate of Oman’s traditional arts and crafts.

Watch the artisans at work over handcrafted silver ware, pottery and weaving. Find the most enticing trinkets and souvenirs that will make ideal gifts to take back home. 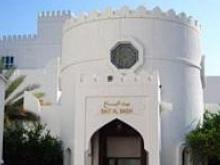 Bait Al Zubair, a showcase for traditional Omani crafts and culture, is located within the winding streets of Oman's enchanting capital city of Muscat.

Anyone interested in discovering the Sultanate of Oman and its rich culture will be well rewarded by a visit to this museum.

The museum houses one of Oman's finest and most comprehensive collections of artefacts from all over the Sultanate. Its displays include traditional Omani weaponry, jewellery, costume, domestic utensils and recreated urban and rural environments. 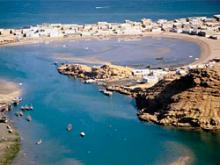 The main city and administrative centre of A'Sharqiyah Region. It is an ancient port and seafaring town that lies on the east coast 310 Km from Muscat. Portuguese, who ruled the Gulf in the 16th century, occupied Sur until it was recaptured by Nasser ibn Murshid, first Imam of Al-Ya'aribah dynasty, in the 17th century.

The name of Sur is thought to be derived from the city of Sur in south Lebanon (Tyre). Sur played a major part in the trade between Oman, East Africa, and India. A variety of goods were imported and exported through its port. It was one of the renowned centres for shipbuilding in the country, with great ocean going, high-sterned baghala and ghanja ships in continuous production. The division between Oman and Zanzibar in 1861, and the arrival of the British India Steam Navigation Company which operated between India and the Gulf, had a deleterious effect on the trading activities of the port, which thus affected the shipbuilding industry. Seven boatyards are now operated by the private sector, and craftsmen still use the traditional methods of shipbuilding to create ocean-going vessels. However, the tall ships are no longer made.

The Sur Maritime Museum charts the history of shipbuilding in the town. With its strong seafaring connections, it is hardly surprising that the legendary sailor, Sinbad, is thought to have originated there. A replica of the type of boat Sinbad sailed is situated in the Al-Bustan roundabout in Muscat. 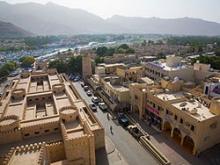 The oasis city of Nizwa, the largest in the interior province, was the capital of Oman in the 6th and 7th centuries AH. Today, it is a diverse, prosperous area, which has many agricultural, historical, governmental and recreational aspects. Nizwa Castle, located in the town proper, is an imposing structure. With its connections to the root of Islam, Nizwa has a number of important mosques, such as Nizwa Mosque; a Friday mosque heralded as a 'beacon of science', So'al Mosque; built in the 2nd century AH, and Al-Shawadhana Mosque which is located in the district of Aqr.

Nizwa is famous for its bustling souq where tourists can buy exquisite copper and silver jewellery and other craft items. The souq is situated next to the castle and was renovated in the 1990's, costing OMR 2.5 million. The design of the souq compliments the castle in every way, and has been constructed using same traditional materials. In 1993, Nizwa won the award of 'Organisation of Arab Cities'.

There are around 90 afalaj in the area, the most important being Falaj Daris; the life maintainer of Nizwa gardens and the water supplier for all domestic purposes. The Wadi Tanuf Dam, completed in 1989, is designed to increase the supply of subterranean water which feeds the afalaj of Daris and Tanuf. The increased supply has led to an expansion in the agricultural area. The dam is 135m long and is located on the watercourse of Wadi Tanuf which is famous in the Middle East for its mineral water. 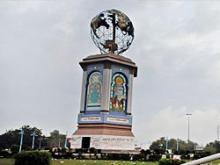 Sohar was the main city of trade centuries ago. The city is renowned for its copper deposits, and archaeological evidence points to copper extraction being carried out 5,000 years ago. There are still three copper mines in operation in Sohar with over 18 million tons of copper deposits.

The city is an attractive region for tourists due to its clean, safe beaches and the plethora of archaeological features. One of the first references to 'Sohar' is in the work of historian, Yaqut Al-Hamawi who implies that the city took its name in the 6th century AH from a descendent of Noah: Sohar bin Adam bin Sam bin Noah. When the Palestinian Arab scholar Muqadisi visited the city in the 10th century AH, he described it as a "flourishing city with a large number of people living there. It is a beautiful city with a comfortable life, ...and its mosque overlooks the sea ... the Mihrab changes colour because it is covered in copper...".

Sohar Castle is one of the most prominent features in the city, alongside the magnificant roundabouts and beautiful public parks. Sohar is under tourist development and a number of deluxe hotels have now been built. A new port is under construction in the city, being built at a cost of OMR 120 million, and it will be home to the largest oil refinary in the Sultanate. Sohar has many wadis with running water, such as Wadi Hibi, Wadi Ahin and Wadi Al-Jizzi. 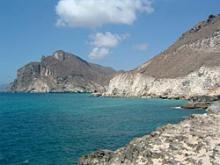 The city of Salalah, the administrative capital of Dhofar Governorate, lies on the Arabian Sea, around 1,040 Km from Muscat. The city has been subject to many historical and archaeological studies over the years and evidence has been found in the form of writing, inscriptions and signs indicating that a number of different civilisations have succeeded each other here, such as the ruins of Al-Blaid and Samhuram ancient cities. The city also encapasses Nabi Ayoub (Jacob) Tomb, housed in a small distinctive doomed building surrounded by green hills as well as the Tomb of Prophit Omran.

Not all the sights in Salalah belong to the past, however. The city contains stunning beaches and steep, mountainous landscapes. The city has also a number of springs such as Ain Sahnot, Ain Rzat and Ain Hamran, around which the parks and gardens were setup. Salalah is quickly developing as a tourist resort and is attracting a number of international hotel chains like Hilton and Crowne Plaza.

Port Salalah, completed in 1998, is anticipated to become one of the world's most important container terminals. Its construction has provided jobs for many Omani. 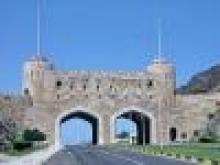 Muscat is Oman's financial and trade centre. Hamad bin Said took Muscat as Oman's capital from Rustaq between 1779–1792 and this has never since been contested. Today, under the leadership of His Majesty Sultan Qaboos, Muscat has improved beyond recognition, but has never lost its pride in its heritage and culture. The capital area is a prime example of intelligent and aesthetic development, blending the ancient and modern.

The shining prosperous city of today has amongst its successes: state-of-the-art hospitals, superior educational establishments, a major port– Mina Qaboos, Seeb International Airport alongside a national airline carrier–Oman Air, a TV and radio network and its own stock market– Muscat Security Market. The Government hosts 27.1% of the country's total population according to 2003 census.

Years ago, Muscat was walled in. However, the wall is now replaced by a stone moat, which the Omanis call Al-Hosn or the fortification. Parts of the original wall still remain in which are located the three main access gates to the city: Bab al Matha'eeb, the Greater Gate and the Lesser Gate.

Muscat has a number of beautiful beaches such as Qurum Beach, Bandar Al-Jissah and Yeti. Public gardens and parks are everywhere with Qurum Natural Park, Riam and Kalbouh being the most polular.

Every year, the Muscat Festival draws crowds of visitors to enjoy the exhibitions and events which the Muscat Municipality organises.