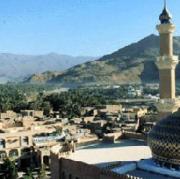 LANGUAGE: The official language is Arabic. English is spoken frequently and is often used as the primary means of communication. Road signs are usually bilingual. Hindi and Urdu are widely spoken as a result of the large Indian and Pakistani expatriate populations. Swahili is used by those of Zanzibari and East African origin, and is a reminder of Oman’s historical sphere of influence. Semitic dialects, closely related to Arabic, are found in the Dhofar region. Kumzari, a sub-branch of Persian, is also spoken in northern Musandam.

Location and Geography: The Omani culture owes much to the geography of the country. The cultural heartland lies in the interior, in the valleys of the mountainous backbone which parallels the coastal plains and the interior plains. Seas to the north and east and deserts to west and south have served to isolate the country from the outside world. At the same time, Oman's presence on the Indian Ocean has fostered a long maritime tradition which has enriched the culture through the settlement of many Baluchis (the Indo-Iranian people of Baluchistan) along the northern coast and the interaction with East African cultures. Traditionally, Oman's capital was located in the interior but Muscat (Masqat), now the principal seaport, has served as the capital since the beginning of the nineteenth century. Northern Oman is separated from southern Dhofar by several hundred miles of desert, which results in the cultural distinctiveness of the Dhofaris.

DRESS: Traditionally, Omani men wear a simple, ankle length white robe called a dishdasha, with either a kummah (woven cap, worn daily) or a mussah (turban, used mainly for special occasions and as more formal headwear). Women’s dress differs depending on the region, but generally consists of a long dress and a headscarf. There are no restrictions on expatriate dress in Oman, although modesty is recommended.

WORKING HOURS: The traditional working week in Oman is from Saturday to Wednesday. In a bid to better align itself with the international working week, the Central Bank of Oman has adopted a Sunday-to-Thursday working week, which has also been implemented by most banks and financial institutions, as well as a majority of foreign firms. During Ramadan, restaurants are closed during daytime hours.

CURRENCY: The Omani rial is the world’s third-highest-valued currency. ATMs are common and accept most major credit and debit cards, as do many stores and restaurants. The exchange counters at the Matrah souq tend to offer better rates than most hotels and banks.

HEALTH: It is important to have health insurance before visiting the country. The free public health care system is available to Omani nationals only, excluding cases of emergency. The quality of private health care is very good, and up to international standards. Oman is generally a cost-effective place to undergo specialised medical treatments, such as dental treatment, laser eye surgery or aesthetic medical treatments.

VISA: Nationals of 69 countries, including Australia, Canada, the EU, UK and US, can easily obtain a one-month visa on arrival for OR20 ($52). This can be extended by one month upon official approval. Visitors of selected nationalities who arrive from Dubai can receive a free three-week visa that is extendable by one week. A fine of OR10 ($26) per day is imposed for staying beyond the validity date of a visa.

Dress Code: Lightweight summer clothing is suitable for most of the year, but sweaters or jackets may be needed for the winter months, especially in the evenings. Compared with certain parts of the Middle East, Dubai has a very relaxed dress code. However, care should be taken not to give offence by wearing clothing which may be considered revealing.

At the pool or on the beaches, trunks, swim-suits and bikinis are quite acceptable. Good quality sunglasses are advised, and photo- chromatic lenses for those who wear spectacles. Hats or some protection for the head are advisable when in direct sunlight.

COMMUNICATIONS: The international telephone country code for Oman is +968. There are two main mobile phone operators, Oman Mobile and Ooredoo, which offer both fixed-line and mobile services. Mobile virtual network operator licences have also been awarded to other mobile resellers, like FRiENDi and Samatel. All operators offer SIM cards that can be activated within minutes after purchase. Internet hotspots can be easily found in coffee shops.

The mobile operating companies also offer prepaid mobile internet, which guarantees immediate web access over the 3G network. This is a simple, relatively inexpensive and time-effective solution, as it generally takes several months to get either a fixed-line or broadband connection installed.

ELECTRICITY: Oman’s electrical outlets are 220-240 V, 50 Hz. British-style three-pronged plugs are used in a number of facilities. However, most electrical equipment is of the European two-pronged type.

TRANSPORT: Taxis are common, as public transportation is not widely used. Taxis tend to congregate around hotels and shopping centres but can also be hailed from the street. Taxis are not metered so it is important to know what the journey should cost beforehand.

Codes of conduct: Oman is a Muslim country so it is important to observe a certain dress code. In public places, women should wear garments that cover their upper arms, and legs to the knee. Men should wear long trousers and shirts. Shorts and sun tops are fine at the beach or by the pool.

Useful Tips: Do not sit in such a way that the soles of your feet are pointing at another person. During Ramadan, please do not eat, drink or smoke in public during daylight hours. Do not take photographs of military installations. Never drink alcohol in public. Please respect the privacy of the local residents and request their permission before taking photographs