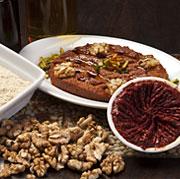 The Omani people are well known for their hospitality and offers of refreshment. To be invited into someone's home will mean coffee (kahwa), a strong, bitter drink flavoured with cardamom, and dates or halwa, a sticky sweet gelatinous substance which is made from brown sugar, eggs, honey and spices. It can be flavoured with many different ingredients, such as nuts, rosewater or even chocolate. Lokhemat is another accompaniment to coffee, which are balls of flour and yeast flavoured with cardamom and deep fried until golden then served with a sweet lime and cardamom syrup. The sweetness of this dish often counteracts the bitterness of the kahwa.

More substantial meals often have rice as the main ingredient, together with cooked meats. The main daily meal is usually eaten at midday, while the evening meal is lighter. Maqbous is a rice dish, tinged yellow with saffron and cooked over a spicy red or white meat. Aursia is a festival meal, served during celebrations, which consists of mashed rice flavoured with spices. Another popular festival meal is shuwa, which is meat cooked very slowly (sometimes for up to two days) in an underground clay oven. The meat becomes extremely tender and it is impregnated with spices and herbs before cooking to give it a very distinct taste. Fish is often used in main dishes too, and the kingfish is a popular ingredient. Mashuai is a meal comprising whole spit-roasted kingfish served with lemon rice. The rukhal bread is a thin, round bread originally baked over a fire made from palm leaves. It is eaten at any meal, typically served with Omani honey for breakfast or crumbled over curry for dinner.

It is fairly simple, but by using various marinades and impregnating meat with spices, the result is a mouth-watering concoction which stimulates the tastebuds. Chicken, fish and mutton are regularly used in dishes. A favourite drink is laban, a salty buttermilk. Yoghurt drinks, flavoured with cardamom and pistachio nuts are also very popular.

Although spices, herbs, onion, garlic and lime are liberally used in traditional Omani cuisine, unlike similar Asian food, it is not hot. Omani cuisine is also distinct from the indigenous foods of other Gulf states and even varies within the Sultanate's different regions. 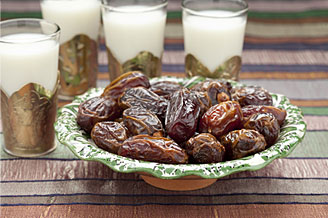 The differences between some of the dishes prepared in Salalah, in the south, and those prepared in Muscat, in the north, are so market that it is difficult to find anything common between them. However, one delight that remains a symbol of Omani hospitality throughout the country are the ubiquitous dates, served with khawa, or Omani coffee. Khawa is prepared from freshly roasted ground coffee mixed with cardamom powder.

Special dishes are prepared for festive occasions. The Islamic world celebrates two main religious festivals - Eid Al Fitr and Eid Al Adha. Eid Al Fitr is celebrated following the Holy Month of Ramadan when people complete their obligatory fasting for 30 days. Eid Al Adha is celebrated on completing the Haj, or pilgrimage, to Mecca, commemorating the sacrifice of Abraham. Dishes prepared during Ramadan are very seldom cooked on other occasions.

Food cooked on important occasions, such as Eid, is of an infinite variety. Omanis across the country serve an array of dishes. In Dhofar and Wusta, the festivities start with ruz al mudhroub, a dish made of cooked rice and served with fried fish, and maqdeed, special dried meat. In Muscat, Al Batinah, Dahira and Sharqiya regions, muqalab, a dish of tripe and pluck cooked with crushed or ground spices (cinnamon, cardamom, clove, back pepper, ginger, garlic and nutmeg), dominates the menu. Other dishes served during Eid festivities include arsia, a dish of lamb meat cooked with rice, and mishkak, skewered meat grilled on charcoal.

Shuwa is a typically Omani delicacy prepared only on very special occasions. Whole villages participate in the cooking of the dish which consists of a whole cow or goat roasted for up to two days in an special oven prepared in a pit dug in the ground.

The method of preparing shuwa is elaborate. The meat is marinated with red pepper, turmeric, coriander, cumin, cardamom, garlic and vinegar and then wrapped in sacks made of dry banana or palm leaves. These sacks are then thrown into the smoldering oven, which is covered with a lid and sealed so that no smoke escapes. In some villages, the meat is cooked for 24 hours while in others it is believed that meat tastes better after 48 hours.